Home
Stocks
Dispatches from a Pandemic: Phase 2 of the lockdown and the Romans are back in the streets, queuing outside their favorite bar for a long-awaited espresso
Prev Article Next Article
This post was originally published on this site 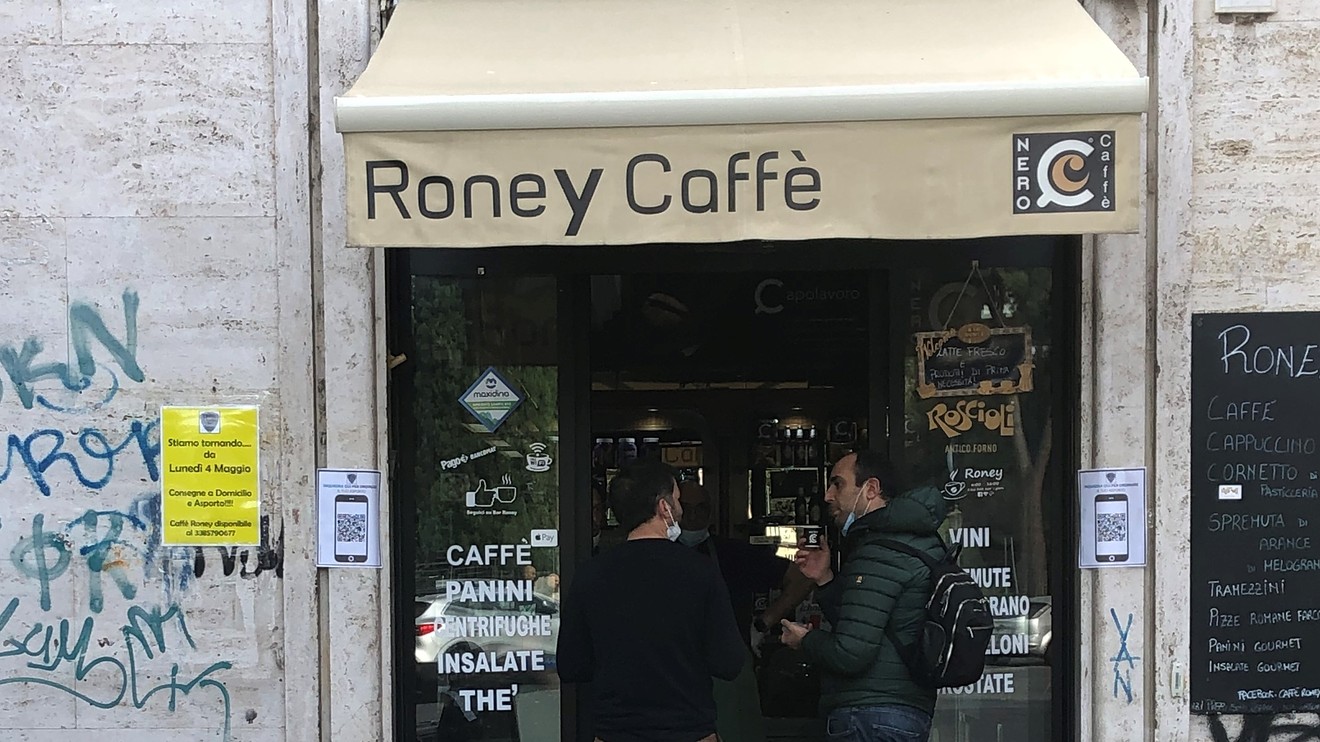 An account of life in Rome under Italy’s coronavirus lockdown. The author is anonymous by arrangement.

“It tastes like cappuccino,” says the middle-aged man in shorts and cap sipping from his plastic cup, standing on the pavement, outside Sciascia Caffè, one of the oldest bars in Rome.

After two months, the capital, like the rest of Italy, is starting to relax some of the lockdown measures after recording its lowest daily number of coronavirus-related deaths for days. Under the new rules, construction and factories can resume work, relatives can meet again — 1 meter apart from each other — and bars and restaurants can offer takeout service in addition to the deliveries that started two weeks ago.

As a result, espresso, cappuccino and latte macchiato can only be served in disposable cups outside the premises.

Here, we are used to drinking our coffee standing at the counter from white ceramic little cups or, for the purists, in small glasses. Walking with a coffee is considered an unforgivable sin. But this is Phase 2 of the worst pandemic in centuries. and even the purists cannot be too fussy about their coffee. Covered in masks and gloves, often staring at a table that blocks the entrance of the cafe, many people patiently wait for their disposable mugs while chatting with the barista. “It tastes like cappuccino,” after all.

And so it goes, a few days into the new rules and the Romans are back in the streets, queuing outside their favorite bar for a long-awaited espresso. The sun is shining, the weather is warm and trees are blossoming. People walk their dogs for more than just one block, kids are back on their bikes, parks like Villa Borghese and Villa Pamphili came back to life, except for the playgrounds, which are still sealed and checked by the police. Buses and the metro are still half empty.

The mayor of Rome, Virginia Raggi, decided to leave the city’s Ztl, or limited parking zone, openly prompting many people to take their car to go to work. Traffic is back. Not at its busiest, but the sound of birds — the soundtrack of the last two months — has already been replaced by the roars of engines and blaring of horns.

The beautiful iconic squares of the center — Piazza di Spagna, Fontana di Trevi — are still quite deserted, although it seems that some Romans have decided to play tourist and have a walk around.

Read:Coronavirus has devastated Europe’s nursing homes. Here are the lessons they learned.

There are more people in the streets, but still not enough to boost the economy after COVID-19. According to bar owners, only 10% of their clientele is back. Queues outside pharmacies are still longer than the ones outside bars. “It is a catastrophe,” claims Paolo, manager at Achilli, a posh cafe and restaurant in the center, normally attended by lawyers, business people, media executives and the occasional football player.

With a rent of over €6,000 a month, 30 espressos a day isn’t enough to keep going. All of the bar’s 15 employees have been furloughed. “We’re still waiting for the funds from the government though,” says Paolo, who has traded his desk for the outdoor counter. His job is making coffee now. “What can I do? We all have to pitch in…”

He isn’t the only one who temporarily had to change his duties. Dario, founder and manager of Irma Bistro, became the delivery boy after Easter, when his gourmet place was able to partially reopen.

“During the lockdown, when we were forced to shut, we lost 75% of our ‘revenues.’ It was a shock, used as we were to being surrounded by customers, from 8 a.m. to midnight,” he explains, admitting that the main worry was for his employees.

“Then, we’ve started our delivery service, focusing on an ad hoc offer and I have to say the reaction of our customers was great,” says Dario, who over three years managed to establish a close relationship with every client. “I know their names, I know their stories.”

On May 4, the bistro began a takeout service. “Before the pandemic it represented 25% of our income, now obviously is not the same since we’ve lost the revenues coming from the many offices around Irma,” says Dario, who is positive about the future. “I’m sure Phase 4 will be much greater than the pre-COVID era!”.

In the suburbs, the situation is rather different. Only one out of five bars has decided to reopen. “It is not worth it,” explains Ivano, who runs Casina, a tiny little place where conversation with strangers and temporary friendship are both served with cornetto pastries. “If I let in two clients it is too much. I cannot guarantee the security measures…there’s no point,” says a discouraged Ivano.

Among the many clouds that come with the beginning of Phase 2, there is a silver lining. Bookshops were the first to reopen when the streets of Rome were still resembling deserted alleys, and for many — children as well as elderly people — they have became a staple of the community. A place to find books, but also comfort.

“The first few days of our reopening I could not believe my eyes. So many people coming inside, buying books, having a chat. I could see in their faces the relief of finding a warm and friendly environment,” recalls Alberto, the owner of Koob, a friendly bookshop in the Flaminio area, near the Olympic Stadium. Moneywise, Alberto has only a tiny hope of regaining what he has lost during the lockdown. But could the coronavirus pandemic work miracles in a country that has one of the lowest literacy rates in Europe? ​

Read:As Spaniards got their first real taste of freedom, hundreds got arrested and thousands were fined